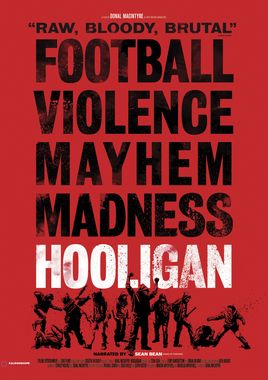 From the director of “A Very British Gangster”, Hooligan is a shocking exposé that tackles the dark side of football from England to Germany, Italy, Turkey, Brazil, Argentina, and the United States

We may find football violence on the news shocking; but there are also many of us fascinated by it. Films such as The Football Factory and Green Street glorify violence and will stir peculiar emotions in us whilst we watch the fighting.

In Hooligan, we will hear accounts from those who enjoy hooliganism, showing real footage from some of the worst battles described, whilst discovering unsurprisingly that hooliganism is no longer just an English disease, but found wherever football is played competitively.  Acclaimed investigative journalist Donal Macintyre will take us to countries like Argentina where hooligans, known as the Barra Brava, commit appalling murder.

Discover how hooliganism is now a big business for the global economy and how many ex-offenders are cashing in their violent past for celebrity status. While police in Britain have brought hooliganism largely under control, see how Germany and Eastern Europe is experiencing a shocking rise in violence.

Finally, what is the future for the hooligan?  The culture can best be summarized by ex-hooligan Cass Pennant who says “Football hooliganism is a gang culture that revolves around fashion, passion and violence”.