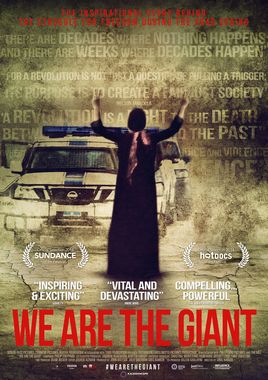 We Are The Giant

We are the Giant follows the inspirational stories of three ordinary young people whose struggle for freedom during the Arab Spring was both fuelled and empowered by social media.

In We Are Giant ordinary citizens face the same moral questions that have defined revolutionary leaders across the ages, from Jefferson to Che to Mandela. With remarkable access, the film takes its audience inside the lives of six extraordinary people who grapple with the agonizing and universal dilemmas at the heart of all struggles for justice and freedom: whether to take up arms and fight, or to advocate change through peace and non-violence.

Directed by Sundance veteran Greg Barker, produced by John Battsek and Julie Goldman and co-produced by Arab-American filmmaker Razan Ghalayini, We Are Giant was filmed largely in secret and sometimes at great risk over two and a half years.

The film is witness as six people from very different walks of life decide they must stand up for what they believe is right, and take action.  Each faces a brutal regime determined to crush them into submission, and each makes very different, painful choices that come to define themselves – and their struggles.

Powerful, tragic and ultimately inspirational, We Are Giant follows the everyday decisions that transform not just individual lives but the fates of nations. As their stories echo across history, the characters in We Are Giant speak directly to our own lives, reminding us that we are all products of revolutions, and offering hope in the face of seemingly insurmountable odds.